An unexpectedly exciting week – with me appearing in three newspapers!
22/07/2012 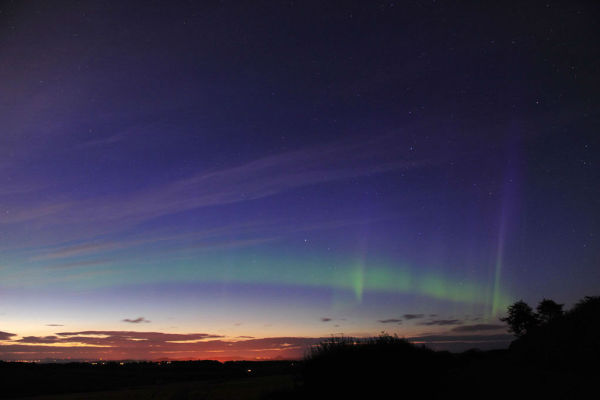 An unexpectedly exciting week – with me appearing in three newspapers!

It began on Sunday evening when I received an alert that the aurora borealis was going to be particularly active – and the skies were clear for the first time in weeks. So I set off at 11 p.m. to drive to the top of the nearest hill and see what I could see.

It was a cold night and I was not really equipped for a long watch – I should have had a flask of coffee or perhaps something stronger with me. So after 2 hours I was ready to give up. Then suddenly there were the lights dancing just above the horizon. The display lasted about half an hour and I was able to get some good shots with a long exposure. It was a magical experience.

At home again, I contacted the usual astronomy websites but I also put a photo onto Blipfoto, sent it to a range of newspapers and tweeted it. It was retweeted a good few times, including by the Scottish actor Ewan McGregor to his 90,000 followers, and appeared as a half page print in The Scotsman the next day. I was also interviewed by the East Lothian News who put the photo on the front page and quite a long article about me as well as the aurora phenomenon on pages 1 and 2. The other local newspaper – the East Lothian Courier – also printed the photo with a wee story and my website address. So we will see what comes of it all – it will be interesting to find out if the good publicity translates into bookings!

I did two portrait sessions this week too - one of a family and one of a new graduate with her dogs. Both great fun and the rain stayed off at last.